A LESSON IN SEXISM

Posted by GladiatHers on December 17, 2015 in Uncategorized |5 Comments

Sigh.  In case you haven’t heard, Gilbert Arenas wants everyone to believe that the WNBA does not have its desired fan base (which is obviously men) because its players aren’t attractive enough and are wearing too much clothing.  Yup, the all-knowing Gilbert Arenas wants the ladies to take-it-off.  In support of his oh-so-unoriginal theory, Arenas posted a video on this Instagram account showing two bikini-clad women playing a game of one-on-one.  (I couldn’t bring myself to embed the video here, but I will give you a link to his Instagram page.) The fact that he believes that sex not talent sells female athletes places him in the category with millions of people across the world, so ordinarily I might not even take the time to respond.  But the length with which he went to degrade women (his fellow athletes no less), the stature of his celebrity and the fact that in a later post he tried so sincerely to defend his statements as being factual and non-sexist, demand that I provide a response.  Now, I’ve already been very clear on what I believe are the solutions to the WNBA’s revenue woes and have no interest in being redundant, so this isn’t a post to re-hash that.  Instead, because it is clear that Arenas hasn’t picked up a dictionary in a while, I want to provide him and his cohorts in sexist rhetoric a lesson on the actual definition of sexism and why his commentary amounts to sexism (and misogyny) not facts.  I’m going to break it down line for line; because that’s what lawyers do.

But first, let’s get some definitions in line.  For the purposes of today’s lesson, sexism is defined as discrimination based on sex; behavior, conditions or attitudes that foster stereotypes of social roles based on sex.  Misogyny is defined as hatred of women; a dislike of, contempt for, or ingrained prejudice against women.  By these standards, Arenas’ opinions are 100%, absolutely sexist (towards men and women) and misogynistic.  Let’s start with the original post:

“NOW this is what america was hoping for when they announced the #WNBA back in 1996… not a bunch of chicks running around looking like, cast members from #orangeisthenewblack…dont get me wrong, they have few #cutiepies but theres a whole alotta #beanpies running around hahahahahaha if #skylardiggins came out like this, I dont care if she missed every layup..imma buy season tickets and I dont even know where the fuck #tulsa is hahahaha #2016newwnbaoutfitPLS and if u think this is sexist,9 times out of 10 u the ugly one and we didnt  pay to come see u play anyway #donkeykong …smdh #thiswillbeawesome #soldouteverywhere” 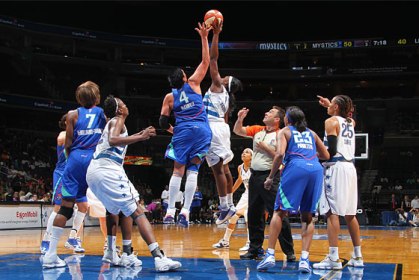 I would very much like to end the analysis here, but unfortunately, Arenas decided to continue his sexist, misogynistic, stupid rant.  In an effort to defend his earlier statements, Arenas provided his followers with some “facts” to support his opinion.  I guess this was meant to somehow prove that what he was saying wasn’t sexist; it’s just the way the world works.  So bear with me as I break down some more of his garbage.*

“Ppl act like I said some s**t thats just down right sexist and rude…..str8 men are attracted to women RIGHT? Men are 80 percent of sportviewers RIGHT? So lets name a few women sports,that still attract the men viewers…#Tennis,omg they were short skirts like female..#trackandfield,short tights and crop tops,so we can see abs “we get a** prints and stomachs,in that sport YAY”#volleyball,short tights and booties hanging out the back off their shorts “F**K wheres my beer” #beachvollyball,fyckn swimsuits,jumping up and down WOW..#arenafootball theres nothing attractive about a women playing #FOOTBALL until they came out with the gear (no they didnt)”girls running each other over with 90 percent of their clothes removed..whos the mastermind behind this #sexist sport he or she needs a f***ing statue..#UFC the manliest sport by far but they seem to attract men viewers by the million OMG it must be the tights and the crop tops and just maybeeeee a fighter gets hit so hard her sports bra falls off hahaha….ALL ABOVE SPORTS seems to understand the concept…..#Basketball has the lowest views by men BECUZ their mimicking MEN #Basketballchicks has some of the best bodies in women sports #Lesbians or #str8 we can give two s***s about what they prefer in the bedroom becuz men prefer #a**andt*****s and last time I checked theres 20 total t*****s and 10 a***s running around but for some odd reason were not getting it..what were getting is #tats #dreads #highsocks #baggyshorts #elbowpads..sounds like MEN attire to me..this sport will continue to be less viewed and under paid compared to other female sports #presidentLAURELRICHIE theres a reason 7 out of the top 10 highest paid women athletes come from tennis #Skirts and #a**…..if the #NBA got rid of the thug imagine for global viewing SHOULDNT you?? I dont care if u dont like the truth becuz MEN DON’T WANNA WATCH WOMEN ACT LIKE MEN..if they came out with an all #gay man sport..I bet they will wear less clothes then the #WNBA and thats a #FACT lol NOW GIVE US WHAT WE WANT and unveil them bodies…SEXINESS RUNS THIS WORLD…if ur selling sex,MEN are buying…ive never seen a man hooker trying to pick up women on the corner.”

As you can see, Arenas’ rant continues on for a number of lines but, as I read it over and over again, I realize that it’s just more of the same sexist, misogynistic, stupid, flat out wrong baloney, and at this point I’m over giving him any more of my energy or space on the blog.  But in summation class, Arena’s statements are the epitome of sexist.  The world doesn’t need its professional basketball players to show up in thongs and bras to play.  It needs men like Arenas to have many seats with duct tape securely fastened around his mouth.  The world needs other men to stand up and support female athletes and it needs more and more girls to be empowered to play sports in clothes that are appropriate and comfortable.

It’s so very sad that on the same night that Abby Wambach, a female athlete who has done so much to advance women’s and girls’ sports and who has amassed a following and respect of boys, girls, men and women, retires I have to sit and explain why Gilbert Arenas is wrong.  It’s the end of 2015 and rather than celebrate women and female athletes we are still forced to defend them, define them and encourage others to be like them.  Let’s hope 2016 brings more open minds.

*It appears that Arenas has removed the latter comments from his Instagram account, but don’t worry…I’ve provided you with what he wrote, word for word.